Long time no see! I hate blogs that contain frequent and lengthy apologies for not having posted for a while. Frankly, moving with 6 month old twins to the other end of the country, a partner starting a new job, a son to settle into university and myself to make over into a full blown Cheshire Wife…been a bit busy, and not just with my new manicure habit, so no lengthy sorry here!

Having said which, restarting this blog was number 3 on my rather long list of New Year’s resolutions (which also included, in order, carving more time out to do things which make me happy, letting the nanny help more in order to achieve the former, not self martyring and cutting out 96 paper snowflakes to decorate the house again which will also help the former, having a bit of a think about the rest of my life – marketing again? Politics? Writing? – tackling the eBay mountain of 18 months’ worth of maternity and twin cast offs, organising 9 months of twin photographs and videos…oh, and learning to drive, given the invention of the pavement seems yet to have arrived in the Wirral, and the weather here has necessitated the invention of another couple of verses to the twins’ favourite rhyme:

Row, row, row your boat/Gently down the Mersey/If you’re living on the Wirral/Best to wear a jersey.

Row, row, row your boat/Right across the harbour/If you’re moving up to Cheshire/Make sure you pack a Barbour. 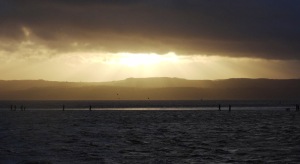 They walk on water up here…

There’s a Tolstoyian amount to download, which I will over the next few weeks, but I thought I’d start with the changes in the little ladies.

So many evolutionary moments which to outsiders may seem tiny, but I gaze on in awe as being the baby equivalent of the development of the opposable thumb. Which they now have, incidentally – they can, sort of, pick up a pea. What then happens to said pea is anyone’s guess, mind…

We can sit. In the sense of gazing around amazed at this new uprightness, getting a bit over excited by it and waving your legs, which then makes you fall backwards. But still all smiles.

We have teeth. Very VERY sharp teeth. We’re both a little bit in love with Baby Jake (and a little bit scared, as is Mummy, by Dr Ranj). We will only go to bed after the ‘the time has come to say good night’ song on CBeebies. The song to which Daddy still doesn’t know the words after, oo, about 176 hearings.

They’re still babbling but it’s clear now they’re trying to communicate something. Usually at volume. Romilly will perform 10 minute monologues, and will shout intermittently to get Charlotte’s attention, but then won’t let her get a word in. The little traitors have stopped saying Mummy though. It’s Daddy morning, noon and night. If they keep it up much longer there’s going to be no more (ba)nana, God’s finest invention. They will eat practically anything if it’s mixed with banana. More on weaning anon, but here’s a little teaser of life at the dining table. Compare and contrast… 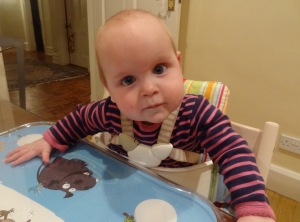 For me that’s been the most wonderful and fascinating development – the blossoming of two, very different personalities. They do seem like little people now (if Joe were here I would get a short thesis on definitions of personhood as he states that Fred the cat displays more traits than his sisters…)

I really have to stop myself and Jon from projecting too much, because we may end up artificially reinforcing some stereotypes. But essentially Romilly is the philosopher, and runs the real risk of early onset wrinkles given her brow is permanently furrowed as she examines the world around her. My thumb seems particularly dissatisfying.  Maybe it’s the manicure…She’s very dainty, precise and feminine. She’ll pose for the camera and has a smile which transforms her face. She has, to date, been brilliant about eating solids, but has less milk, so given her lower birth weight is still slim, though she’s taller/longer. Slender and willowy. Obviously gets that from my side.

Charlotte is a boisterous, cuddly, affectionate clown, who roars and chuckles and gurns on command. She has put down commendable stores of self upholstering for the winter and her burps can probably be heard in Wales. Who does that remind you of? But against her tomboyness, she has the most wonderful thick, wavy hair. A veritable Rapunzel. Whereas Romilly is bald on top with strawberry blonde sideburns. She’s so pretty BUT from certain angles, especially if you put glasses on her, looks not unlike Andy from Little Britain.

Most wonderfully of all – and boding well for making a killing on Youtube ad revenue if I can ever catch them at it with the video – is that they’ve really noticed each other and are interacting all the time. They grin at each other in the morning. Previous biting and hair pulling and random happy slaps have become actual kissing and stroking. They will gaze on in concern when the other is crying. They copy each other: Charlotte does her best rocking Rainman impression in her highchair which Romilly has studied at length and now does too. They take toys off each other but it seems to be in the spirit of sharing. Their Granny (thanks!) gave them lots of rather loud musical instruments for Christmas and we get little duets from The Royal Festival Playpen.

I could sit in that playpen and gaze at them and wonder for hours. Wonder at the fact I grew them. Wonder at the changes in them. Wonder what the years will hold for them and what good they will bring to the world. Actually, I do. Don’t tell Jon. I am just SO BUSY with all the housework and admin and everything darling.

PS – one thing I am finding hard is the absence of the wonderful twins’ club we were part of in Dulwich. It’s so useful to have people to share a jolly good moan with. Not to mention seeing the triplet Mums and realising it’s not THAT bad. But the Wirral seems proudly singleton. I’ve tried TAMBA, twinsclubuk, even advertising on Mumsnet to set up my own, but the nearest one is a 45 minute drive, which is another good reason to get off my bottom and learn. I imagine it’s a demographic thing – Mums seen younger here, and the chance of multiple pregnancies increase with age (there is a 90% chance any subsequent pregnancy for me would be multiple, so we’ve put the Barry White CD away.) And maybe also money, as IVF is pricey. So tempted to get 100% natural T shirts for the twins given the amount of people who ask what are really quite impertinent questions!

So, if anyone’s reading this, and lives on the Wirral/West Cheshire/North Wales/Liverpool – shout! Please! I have cake!

2 thoughts on “All change please”